In March 2017, our friend at ASARCO Chuck Hansen learned that his grandson Jaxton was to be born with a heart defect and his son was not going to be able to cover the costs of the additional surgeries and ICU time that would be needed to save his life once he was born. A golf tournament was devised as a way to raise money to help them cover the costs. The amount of money raised last year was around $12,000.

Jaxton was born in June of 2017 and had to undergo several surgeries. The one photo attached is heart breaking and was taken right after one of his heart surgeries in October of 2017 and the other was a couple days later.

Chuck was so overwhelmed that he decided to partner with the Cardiac unit at Phoenix Children’s Hospital for this year’s tournament and raise money for other families with children in the cardiac unit.

This year the tournament was held on June 30th 2018 at the Wildhorse Pass Casino/Golf Course in Phoenix. DP sponsored 4 teams to golf.

DP has been involved since the beginning and this year’s event raised $37,700. We were major sponsors and also had a side prize on one of the par 3 holes where DaviJo and Debbie sat urging golfers to throw in money for the chance to win a new Cobra Driver. That hole raised $500 in addition to the sponsorship money we donated. 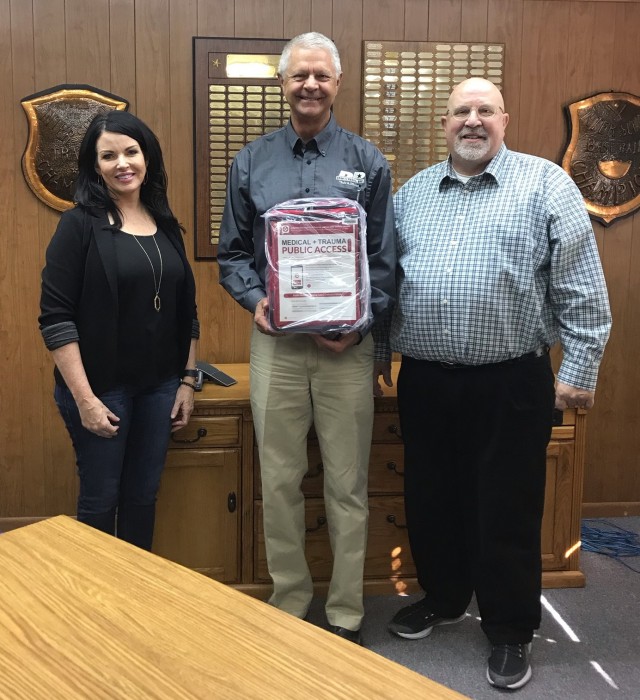 In conjunction with the Arizona Mining Association, DP Industrial contributed to the project of providing local school districts in cities close to mining operations with a Mobilize Public Access Medical/Trauma station. This piece of equipment allows a teacher or coach to quickly administer lifesaving rescue efforts to students or administrative personnel at the school before First Responders can arrive.
Each kit includes items necessary to treat Severe Bleeding, Unconsciousness, CPR, Reuse Breathing for Children and infants, AED Application, Hypothermia, Seizures and Choking.
Robert Breitling from DP Industrial presented the Globe Unified School District with a kit on April 9, 2019. In attendance at the presentation was Jerry Jennex Superintendent of the School District, and Robin Bradford from Freeport McMoran Miami operations.

Employee of the Month

Felipe was nominated as February's employee of the month for traveling to North Dakota in the worst snow storm of the year, as well as his client relations. Felipe defines himself as "friendly, efficient, and secure." Felipe has interest in business management, he hopes to one day work his way up to project manager. He has enjoyed working with DP because of the flexibility, more time with his family, and lower stress levels. Felipe work’s safe for himself, and others around him.